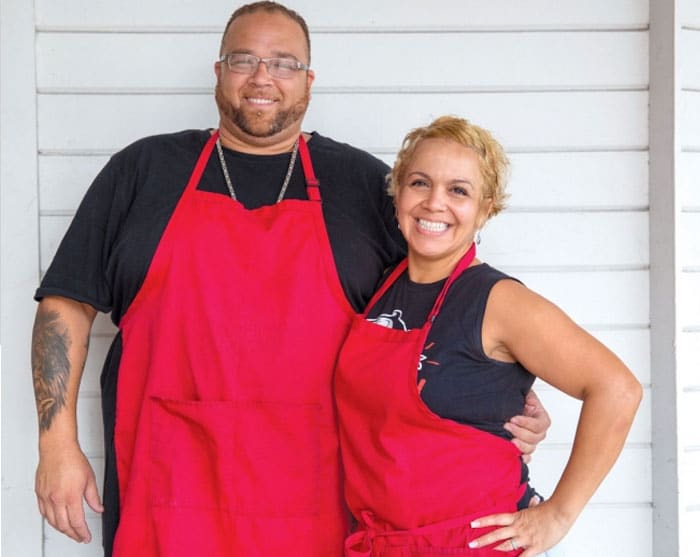 There's nothing we like more than a feel-good story about a hardworking family making it big doing what they love. So it is with great satisfaction that we present to you the tale of Sofrito Mama's, the story of Jason and Alicia Bolden and their little family business that could.

As Alicia Bolden tells the story of how she fell in love with cooking as a young girl in Philadelphia, her face shines with happiness.

"I was a shy young girl and I preferred spending time in the kitchen helping my mother to cook over being out in the living room with everyone else. I quickly learned that cooking was a way to express love and passion. My mother would make these delicious Puerto Rican home-cooked dinners and my father would consume them with absolute glee. He could not get enough of her food. Ultimately, I fell in love with my father's reaction to my mom's cooking."

Alicia did not try for a formal culinary education. She learned everything from cooking with her mother and following her own instincts. She worked in the dental field and as a bookkeeper, and bartended part-time. But in her 20s she began cooking for friends and through word of mouth picked up the occasional catering job.

In 2006 she met Jason, the manager of a cheesesteak company from South Jersey who loved to salsa and merengue. Jason immediately recognized Alicia's talents and together they formed A&J Caterers. Eventually they decided that they were sick of cold winters, so they followed the advice of fellow members of the Church of Hope (whom they credit with helping to establish them in this community) and they decided to relocate to Sarasota in 2010. By the end of December 2011 the Boldens had amassed enough seed money from catering jobs to open a small storefront in Beneva Commons, where Sofrito Mama's opened in January 2012.

Alicia tears up as she talks about how her son and her father, Pedro, helped them with the restaurant in the beginning. "My father passed a few months ago and I still miss him. My mother, Alicia, is working with us now and she loves it. Our daughter, Aiyana, is 16 and she works the front counter. I love having my family around. We are very close knit-a true family business."

The Boldens believe that people work hard for their money and they should be able to get their money's worth with home-cooked meals made with love. "We make everything from scratch, we have no distributors. We hand-select our meats and our produce. We even do all of the cleaning ourselves because cleanliness is exceptionally important to us."

Sofrito Mama's has been a runaway success. People flock to the small takeout counter to pick up flavorful roast pork, tender chicken stew, expertly caramelized plantains, and bold house-made hot sauce. Thanks to the reaction of patrons, the Boldens have been invited to expand their mom-and-pop operation into being the anchor restaurant for an urban revitalization development project located at 2101 Main St, east of Washington Blvd.

"It's in keeping with our vision for Sofrito Mama's. We make urban, soulful cuisine informed by the cities we grew up in. We can't wait to expand our menu and add more of the foods we love, like Philly-style cheese steaks and more of my Puerto Rican specialties."

As with most happy endings, we think that this is only the beginning for Sofrito Mama's-and we look forward to watching this family business go from strength to strength.